What Is the Nikon Z7? 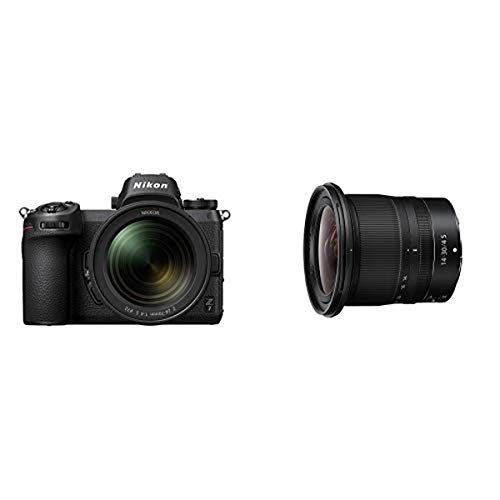 The Nikon Z7 is Nikon's first full-frame mirrorless camera, and it may be their most well-rounded camera to date. It's built as a workhorse from the ground up for both stills and video and it introduces the all-new Nikon Z-mount. The camera is still a Nikon, and it keeps many familiar features of the company's DSLR past, but it streamlines them into a smaller, lighter body and bumps up the specs on almost every feature.

The Nikon Z7 sports a full-frame BSI-CMOS sensor with a whopping 45.7MP and on-sensor phase detection. It also has in-body 5-axis image stabilization, which is fast becoming the norm for high-end mirrorless cameras. It does up to 9 fps shooting (in both JPEG and 12-bit RAW) and it can capture beautiful 4K video up to 30p internally. It also has a SnapBridge Wi-Fi system with Bluetooth.

The Nikon Z7's huge sensor can capture beautiful images with impressive latitude. Its high and low-ISO performances are equally strong, and the lack of an anti-aliasing filter gives depth to details and sharpness. It shoots RAW images with very strong detail, even up to high ISOs, and JPEG colors are punchy and vibrant. The only downside is that noise reduction can sometimes blur the details.

Nikon doesn't get as much credit for its cameras as Canon, but the company has been putting out capable and reliable video cameras for years and the Z7 might be their best option yet. For starters, it captures 4K images in MPEG-4 or H.264 with the option of either using the full width of the sensor or using a Super 35 crop. For slow-motion, you can use the 1080/120p mode, which can record at 5x slow-motion.

The Nikon Flat Picture profile produces a gradable image for post-production, and there's also the option for 10-bit Log output through HDMI for the highest quality footage possible. There's a microphone and headphone jack, intuitive on-sensor AF, and other premium video tools. Unfortunately, the manual focus here is disappointing because it doesn't allow linear focus response, so experienced videographers may want to get adaptors.

The Nikon Z7 is a slick-looking machine. With dimensions at 134 X 67.5 X 100.5mm and a weight of 675 g it's compact and portable. The handgrip jutting out from the front also adds significant depth, so the majority of the camera body is actually thinner than the dimensions would suggest. It's made of a durable magnesium alloy and it's weather-sealed to protect it from the elements. The 3.2-inch tilting touchscreen on the back has an impressive 2,100,000 dots and features an interface that's easy to navigate.

The Nikon Z7 is Nikon's first full-frame mirrorless camera, and it may be their most well-rounded camera to date. It's built as a workhorse from the ground up for both stills and video and it introduces the all-new Nikon Z-mount. The camera is still a Nikon, and it keeps many familiar features of the company's DSLR past, but it streamlines them into a smaller, lighter body and bumps up the specs on almost every feature.

We picked a few similar products to see how the Nikon Z7 compares. 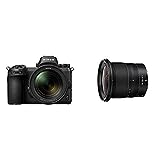 The Nikon Z7 is new, so its body-only price of $3,400 is steep. Not to mention the XQD cards (and reader) will set you back another pretty penny. That said, you get what you pay for, and the quality of this camera is impressive.

The Nikon Z7 is simple to use on the surface, but it has plenty of depth in its customization options. Menus are easy to navigate with the bright and detailed OLED panel touchscreen and there are seemingly endless video options to tinker with.

The Nikon Z7 delivers on its impressive specs. Not only will it deliver crystal-clear images with vibrant colors, but it shoots stabilized 4K videos with unbelievable sharpness. With a solid battery capable of charging over USB, the Nikon Z7 is built to impress.

The Nikon Z7 looks great, but that's not even the best part of its design. It's built with functionality in mind, and its top-notch manufacturing makes components like the full-resolution EVF, OLED touchscreen, and unparalleled autofocus seem like bonus features.

The Nikon Z7 comes with a standard one-year manufacturer's warranty 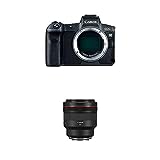 The Canon EOS-R is Canon's first full-frame, mirrorless camera, and it's Canon's direct flagship competitor to the Nikon Z7. It uses Canon's new RF mount and has roughly the same effective 30.3MP sensor as the earlier EOS 5D Mark IV.

The Canon EOS-R retails for around $2,300, making it less expensive than the Nikon Z7 as of this writing.

The EOS-R should be fairly easy to use for experienced photographers. It has a 2.1 million-dot LCD screen, just like the Nikon Z7, and the menus are easy to navigate. One potential advantage of the Canon EOS-R is its retention of the now-standard SDHC/SDXC card. Most people probably have a lot of these cards lying around, which could save money in the short term, but Nikon's adoption of the newer, faster, more efficient (and more expensive) XQD cards may prove the better option in the long term.

Certain features of the EOS-R, like the autofocus, are stronger than the Z7's features. The Nikon Z7 has 493 phase-detect AF points, but the EOS-R has 5,655 points. The EOS-R's lower measurement of 6EV is lower than the Z7's 3EV, enabling it to detect subjects more easily in low-light situations. The Canon also has a slightly higher ISO range, from ISO 100 to ISO 40,000, compared to the Z7's ISO 64 to ISO 25,600. The Canon EOS-R also has a longer battery life, offering 350 frames per full charge over the Z7's 330 frames per full charge.

All in all, the Nikon Z7 bests the EOS-R in many other key areas. The Z7's sensor is at a significantly higher resolution, and the EOS-R lacks sensor-based stabilization. The Canon also includes an optical low-pass filter, unlike the Z7, so its images are less crips.

The cameras are comparable in size and weight, with the Canon weighing slightly less. The EOS-R has a smooth look and a nice full-frame sensor. The Canon's lens mount is 54mm, nearly as big as the Nikon's 55mm diameter, but the Nikon's tighter flange depth allows the body to be smaller. 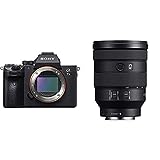 The Sony Alpha a7 III is one of Sony's flagship full-frame mirrorless cameras. With a 24MP sensor and video taken from a 6K region from the sensor, it competes with the Nikon Z7 in several areas.

With the a7 III, Sony hits a sweet spot for a price at around $2,000, making it the least expensive camera on this list.

The a7 III is suitable for many types of photography and videography and it's very easy to use.

The a7 III delivers some impressive specs considering its lower price point. Its 24MP sensor isn't nearly as big as the Z7's, and it has downsides like an operational lag and a low-resolution viewfinder, but the a7 III has 10fps burst and matches the Z7's in-body stabilization. The a7 has great autofocus and several features for video, and it includes zebra stripes and peaking for exposure control. Autofocus during video can be tricky because the camera can get confused when there is more than one subject in th frame.

The Sony a7 III is bulkier than the a7 II, but it's still a compact mirrorless camera. It has ergonomic controls that make operation more comfortable, including a bigger grip and a larger battery that can last several hours on a single charge. The front and rear dials are pronounced and easy to use, but buttons like the new AF-ON and AEL buttons are a bit small for our liking. One big advantage of the a7 III is its dual card slots, which allows for longer shoot times without changing cards. The Auto ISO is excellent and there are tons of options for customization.

The Sony a7 III has a standard one-year manufacturer's warranty.

The Sony Alpha A7R III is a full-frame mirrorless camera with a 42MP sensor. It's essentially the big brother to the a7 III, and it offers a feature set (and price point) closer to the Z7.

The Sony a7R III is a straightforward camera with some interface quirks on the touchscreen that take getting used to. Menus can be confusing, but they can be easily customized. Unfortunately, the menu doesn't really take advantage of the 3' LCD touchscreen, unlike the Z7. The a7R III's touchscreen is primarily used for moving the AF point, but it's rather unintuitive and unresponsive. However, the depth of customization makes up for the lackluster touchscreen options.

The a7R's 42MP sensor is almost as good as the Z7's 45MP sensor, and the pixel counts might as well be identical. Their image sharpness and dynamic range are neck-and-neck, although the Z7 has a slight edge in the color department. For photography, you can't go wrong with either one, but for video the Nikon has the slight edge. The Sony a7R III matches the Nikon Z7's 4K capabilities, and they have nearly the same options in frame rate/resolution combos.

The main differences between the cameras lie in their video specs. The Z7 has a more rolling shutter, but it also has the option to output over HDMI at 10-bit 4:2:2 N-Log. The a7R III maxes out at 8-Bit 4:2:2 output through HDMI. Each offers a selection of Log curves that suit different circumstances, but Nikon's camera ultimately gives you more flexibility. Each one includes both sensor-shift 5-axis-image stabilization, a microphone, and headphone jacks for audio. The Autofocus is effective on both, but the Z7 has the edge because of how easy it is to focus points with the touch screen.

The a7R III has a nice, professional look to it, and it features the largest and grip ever to be offered by the line. There's a joystick controller on the back which makes navigation through menus quick and easy, and the Z7's has a sturdier weather sealing than the a7R III.

The Nikon Z7 is a stellar full-frame mirrorless camera that puts Nikon to the forefront of the mirrorless camera race. The Nikon Z7 outperforms all of its competitors in the most important areas, and even though it's expensive, it's worth every penny. We give it 5 stars and a full recommendation, so if you have the cash to spare, try to get your hands on a one as soon as possible.

This site uses Akismet to reduce spam. Learn how your comment data is processed.